Case study: To Kill a Mockingbird by Harper Lee

In this blog, To Kill a Mockingbird and Gale Historical Newspapers for Secondary Schools show how historical newspapers can support the teaching and learning of texts leading to better student understanding.

What did critics think of now ‘classic novels’ at the time? 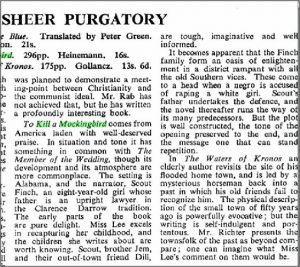 To start with students could search Gale Historical Newspapers for Secondary Schools for reviews of To Kill a Mockingbird to gage the reception the novel received at the time of publication.

The extract to the right shows a positive review which gives the student some key plot points and character profiles as well as an introduction to the racist context of the novel ‘it becomes apparent that the Finch family form an oasis of enlightenment in a district rampant with all the old Southern vices.’

Students will be able to find more reviews by searching for To Kill a Mockingbird and filtering their search results by the year the book was first published, 1960. Maybe see if they can find the review that states ‘If Miss Lee continues to give us novels even half as good as this one, a new star will blaze in the firmament of fiction.’ Can they tell you why this is considered ironic?

What else can we find out about this book via newspapers?

A good starting point for student research in to the context of the novel is Gale Historical Newspapers for Secondary Schools’ Term Cluster tool. It allows them to visualise which words and subjects are found most often in the text of their search results. By searching for the term ‘negro’ students can get a good impression of the kinds of stories reported, giving them some idea of the way black people have been treated and the attitudes white people held towards them.

Students can click on the different terms found and are able to see relevant news articles from the archive with the search terms included. It is a useful tool to help them make connections at the beginning of research. 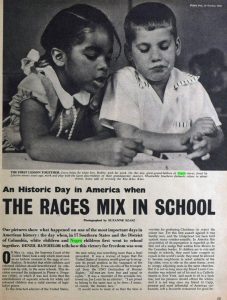 If students search in the newspaper archive for ‘Negro’ filtering by the time the book was written (mid 1950-60s) they will find articles such as An Historic Day in America When The Races Mix In School which talks about 17 May 1954, the day which 17 Southern States ruled that black and white children should be educated together.

Before then schools were segregated and black children were not allowed to attend white high schools, effectively denying black children an education as, in the early 1930s, there was not a single high school built for black students in the South.

The article also refers to people who still fully opposed the integration of black students and were refusing to give in.

‘In some places free schools were changed into paying schools to escape the application of the law. At Montgomery, Alabama, fifteen Negro children were refused admission to a new all-white school. In Washington, twenty-eight parents sought a last minute injunction to restrain the school authorities from implementing the law.’

Images found in Gale Historical Newspapers for Secondary Schools from 1956 show the beginning of the school term in the South where white people are still protesting black students attending school.

The most serious incidents ‘were the riots in Clinton, Tennessee, where twelve Negro pupils had been assigned to the high school…Units of the National Guard were summoned to restore order, and by September 5, though the atmosphere was still tense, the twelve Negro pupils were again able to attend their school.’

Teachers could ask students to search for images and articles like these or if there is a definite article they wanted students to look at they could share the article with them via email and a variety of social media platforms including Facebook, Twitter, Reddit, Pinterest, Google+, LinkedIn, Tumblr and more. 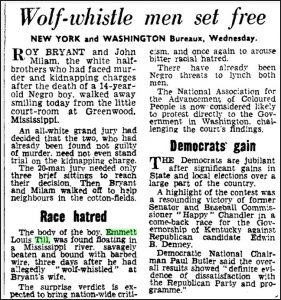 Another legal case considered to have influenced Lee is the tragic case of Emmett Till. In 1955 around the time that Lee was writing To Kill a Mockingbird a black 14-year-old boy, Emmett Till, was murdered after being falsely accused of flirting or wolf-whistling at a white woman.

Two men, the woman’s husband and his half-brother were arrested for his kidnap, torture and murder but an all-white jury acquitted them. The case of Emmett Till is often compared with the fictional Tom Robinson case.

Students could follow the case of Emmett Till’s murder in the newspaper archive comparing it with Tom Robinson’s case in To Kill a Mockingbird.

It is widely believed that To Kill a Mockingbird was influenced by the “Scottsboro Boys” case, which happened in 1931 (the height of the Great Depression) when Lee was five. Nine black teenagers from Alabama were falsely accused of raping two white women on a train. Eight of the boys were convicted and sentenced to death, the youngest to life in prison.

However, after several appeals and retrials, in which one of the alleged victims admitted to making up her story, charges were dropped for four of the boys. Their case was eventually considered an injustice and led to the end of all-white juries in the South. On November 21, 2013, Alabama’s parole board voted to grant posthumous pardons to the Scottsboro Boys.

Students can follow the case through the pages of time in the 1930s. The Term Frequency tool allows students to explore the frequency of one or more search terms in the content over time. Here the term ‘Scottsboro’ has been entered between the dates 1930-1940. Students are also able to plot multiple terms helping them to see if there is a connection between two search terms.

Students can monitor the impact of the Scottsboro case over the following years. Below are just a few articles exploring the outcomes of the case. 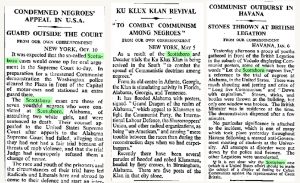 All these sources can help students to understand what was happening in the US at the time Harper Lee wrote To Kill a Mocking Bird. These are just a few examples there is a lot more to discover in Gale Historical Newspapers for Secondary Schools. You can take a free 30-day trial to see the excellent content for yourself.